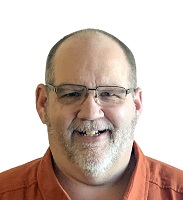 James is a family man with a passion for adventure. He and his wife, Sherrie, love to find new places and have new experiences. He has been on a bobsled run, learned how to fly a plane, zip lined through the rain forest, attended a Hollywood premier, attended a book signing in Times Square for his part in a book that became a Best Seller, was part of an America’s Cup sailboat crew, got to meet Nickelback backstage and has even driven a NASCAR race car and a Zamboni. He has developed a passion for riding motorcycles and loves hitting the open road.

He and Sherrie are proud to have shared those experiences with their three children, Ryan, Tyler, and Devyn and now have several grandchildren to spoil for years to come.  Their favorite spot to spend time together has easily become Walt Disney World, which James affectionately refers to as his second home.  James strongly feels that as you grow older, you must still be a kid at heart. Life is so serious and there continues to be more pressure the older you get. It’s important to get to play with the kids, ride the rides, and be active in his relationship with his kids and grandkids.  His passion for kids is also the driving force behind years spent as a youth hockey coach. After spending years coaching kids from 6 years old all the way to 15, James has learned how important it is for adults to have a positive effect on children. When he coached the kids, James always wondered if he had an impact on them, and then 15 years later, when he saw them carry the same respect and discipline outside the rink that they were taught in hockey, he realized he did and they still call James coach!

James is also passionate about helping others and has volunteered with the American Red Cross with Sherrie and the kids since 2011.  At home, when working a shift, James and family respond to residential fires and provide aid to the homeowner in the form of a safe place to stay and funds to replace food and clothing lost in the fire.  James and Sherrie also have been deployed numerous times to national disasters such as tornadoes, floods and hurricanes to provide much needed hot meals to those who have lost everything.

You might be asking why you should care, right?  You should care because this LIFESTYLE James and his family have experienced was first created in his mind over 20 years ago and then passionately pursued until it became a reality as a direct result of owning and operating multiple extremely successful law firms.

In 1994, less than 12 months out of law school, James began his career with a passion for helping people get out of debt and opened his first consumer bankruptcy firm in St. Louis, MO.  James’ passion for working in the world of bankruptcy first came when he himself had to file for bankruptcy during law school after being laid off as an assembly worker with General Motors. The process was difficult, but something positive did come out of it: it clarified what he wanted to do.  James firmly believes that in law school, you take classes in the law, but you aren’t taught about what kind of work is going to make you happy or how to build a sustainable law business to give you the lifestyle you want. James is extremely grateful to have learned his passion early and followed his dream to build a multi-million-dollar consumer bankruptcy firm.

By the end of 1996, James’ firm broke the $1 Million mark in revenue and he was approached to open a 2nd office in Detroit, MI.  He took the same systems, policies and procedures that skyrocketed the St. Louis office and simply duplicated them in Detroit.  By 1998, the St. Louis and Detroit offices were the top filing bankruptcy firms in their respective districts with both offices earning well over 7 figure incomes.  In 1998, James once again duplicated his systems and opened a 3rd location in Kansas City, MO.  By 2001, the Kansas City location surpassed the $1 Million mark itself again proving that regardless of location, amount of competition and plenty of people saying it can’t be done, James blocked all of that out and did it anyway.

By 2008, James sold his interests in the Detroit and Kansas City offices to focus his efforts on St. Louis and added another practice area representing consumers against abusive bill collectors.  James joined and actively participated in several Mastermind groups and fully understands the power of being a part of a group of like-minded individuals with the similar financial, professional and personal goals.  At its peak in 2010-2011, James’ firm grossed almost $4 Million annual revenue.  In 2013, James felt a compelling desire to teach others how to successfully start and manage a thriving law firm.  In 2014, James sold his interests in the firm to actively pursue a coaching career.

James received his Business degree from Lindenwood University in 1989 and his Juris Doctor from St. Louis University in 1993. He was admitted to the Missouri bar in 1993; the US District Court for the Eastern District of Missouri in 1994; and the US District Court for the Southern District of Illinois in 1995.  James currently serves on the Local Rules Advisory Committee for the U.S. Bankruptcy Court Eastern District of Missouri.  In 2009, James was selected as one of America’s Top 20 Premier Experts, for which he was featured in such national publications as USA Today, The Wall Street Journal and Newsweek, as well as interview appearances on Fox, CBS, ABC, and NBC. He also co-authored a book with America’s Premier Experts titled Shift Happens, which provided a review of the then escalating economic recession. The book became a best-seller in three different categories soon after it was released.  In addition, he has been a featured guest on the prominent St. Louis radio show “The Next Big Thing,” and was the legal expert for St. Louis radio personality Niecy Davis from Foxy 95.5 during which he answered the most pressing legal questions from Missouri and Illinois residents live on-air.  James was voted “St. Louis’ Best Attorney to Have on Your Side” in 2008 and “Bankruptcy Lawyer of the Year” in 2010.

In addition to the book Shift Happens, James is the author of several books published between 2008-2013.